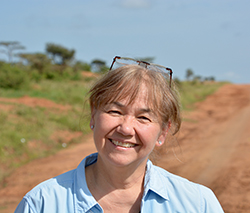 
Achievements Recognized by the Award
Dr. Naomi Pierce, Hessel Professor of Biology at Harvard University and Curator of Lepidoptera at the Museum of Comparative Zoology, is one of the world’s leading figures in entomological research. The main theme of Dr. Pierce’s research is the symbiotic relationships between insects and other organisms. Her research originated in behavioral ecology, with the study of the symbiosis between lycaenid butterfly larvae and ants. Dr. Pierce’s field experiments provided the first rigorous documentation of how lycaenid larvae provide ants with nutritive secretions in exchange for protection against predators and parasitoids, but also how this symbiotic behavior exacts a metabolic cost from the larvae as they mature. This work led to Dr. Pierce to expand her focus to insect symbioses as a whole, and today she investigates a wide variety of topics including coevolution, reciprocal adaptation, mechanisms of adaptation and defensive responses to parasites. Dr. Pierce first developed molecular phylogenies of the basic “cast” of different symbiotic organisms such as butterflies and ants as well as orchids and euglossine bees, which have an intriguing specialized relationship based on pollination. Using contemporary comparative methods to combine this evolutionary framework with ecological data, Dr. Pierce and her colleagues advanced a succession of novel ideas. They established, for example, that the symbiosis between orchids and bees originated much earlier than had previously been thought, that the relationship between ants and lycaenid larvae evolved repeatedly from one of mutual benefit to one of exploitation, and that bacterial gut symbionts play a significant role in the diversification of ant species. From a functional standpoint, Dr. Pierce also pursued molecular research on signaling pathways and trade-offs related to the systemic defense responses of plants to their two greatest natural threats: pathogens and herbivorous insects.
Scientists typically become ever more specialized and narrow over the course of their careers: their focus may start with a single species, and culminate with a single gene in that species. What is notable about Dr. Pierce, in contrast, is the way in which her work is inspired by and directed by her interest in natural history, resulting in an ever-expanding range of study species, biological systems and scientific technologies. Dr. Pierce is an outstanding educator, and many of her doctoral students and postdoctoral fellows are now are active across the world as leading authorities on their respective organisms and topics of study.
Unusually, Dr. Pierce’s research is notable for both its breadth and depth. She is a worthy recipient of the International Prize for Biology for these reasons, especially considering the prize is being awarded this year for the study of insects, which are the most highly diversified life-forms in the terrestrial environment.

To mark the award of the 35th International Prize for Biology to Dr. Pierce, a commemorative symposium will be held as follows. Registration may be made to attend the symposium. They must be received by November 20, 2019.