On August 7, the Committee on the International Prize for Biology (chaired by Dr. Heisuke Hironaka, Acting Chairperson of Section II, the Japan Academy) of the Japan Society for the Promotion of Science decided to award the 33rd (2017) International Prize for Biology to Dr. Rita Rossi Colwell, Distinguished University Professor, University of Maryland, College Park, USA.
The field of specialization for the 33rd Prize is "Marine Biology". 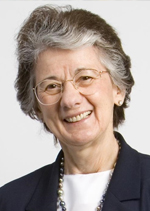 In her research work over the past 60 years, Dr. Colwell has authored or co-authored more than 750 papers and 19 scholarly books. Her research area is relevant to such fields as marine bacterial taxonomy, physiology, and ecology, as well as to the relation of marine bacteria to human health. She established the taxonomy of vibrios, which include V. cholerae. She pioneered the use of DNA sequence data for classifying microorganisms, a technique well known today. She was also early to make use of numerical, polyphasic data to identify bacteria, earning high acclaim for helping to establish a foundation for today’s bioinformatics analysis.

By employing these leading-edge techniques in studies of microorganisms, in Chesapeake Bay on the east coast of the United States as well as in the open ocean and deep sea, she discovered that vibrios seemed to disappear in the winter and then reappear in summer. Her analysis of this phenomenon concluded that the bacteria actually continued to exist in winter months, but in what she defined as the viable but non-culturable (VBNC) state, meaning they could not grow in routine culture medium but were living cells. She pointed to the importance of this state, which continues to be a key and widely studied concept in microbiology today, even though many aspects of it remain to be elucidated. Noting that low temperatures seemed to be a main factor causing this VBNC state, Dr. Colwell suggested the possibility that global warming might lead to an expansion in the habitat range of vibrios. After analyzing past data over a half-century period, she and colleagues showed that in the northern Atlantic Ocean near the North American and European coasts, the expansion of the habitat of plankton to which vibrios attached themselves did in fact correspond to wider outbreaks of vibrio diseases in humans. She is highly regarded for helping to extend studies from basic natural sciences, including microbial taxonomy and ecology, to the field of medicine with its impact on human life.

In her studies in Bangladesh and elsewhere, Dr. Colwell further discovered that by using a sari, the traditional dress of women on the Indian subcontinent, to filter water from ponds and rivers before drinking, plankton was removed from the water along with V. cholerae attached to it. After studying the relation of filtering by sari cloth to cholera occurrences in many villages of Bangladesh, she found that simply filtering drinking water in this way greatly decreased cholera cases. Such studies on the safety of drinking water have been highly significant as health and welfare projects in developing countries.

In addition to her many papers and books, she has appealed to the necessity and importance of marine microbiology studies through such media as a documentary film, endeavoring to spread the knowledge and techniques required for this research field. She has also contributed actively to the advancement of microbiology research for addressing the problem of marine pollution, with its increasingly profound implications for human beings. On the educational front, Dr. Colwell has provided guidance to well over a hundred doctoral students and postdoctoral researchers, each of whom has gone on to make outstanding contributions to their fields.

In addition to her research work, she became the first female director of the US National Science Foundation, helping to promote science and technology. During her time in that post, she devoted her efforts to supporting women and minority researchers and to building up science education of young people responsible for the future. In addition to marine biology, she has received wide recognition for her contributions to international science and technology exchanges and development. The above and other accomplishments on behalf of science and society make Dr. Colwell a worthy recipient of the International Prize for Biology.