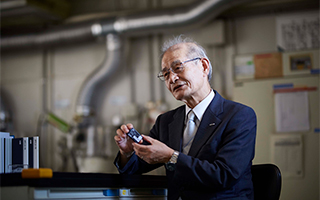 We at the Japan Society for the Promotion of Science extend our heartiest congratulations to Dr. Akira Yoshino (ASAHI KASEI Honorary Fellow) on his winning of the Nobel Prize in Chemistry.

Dr. Yoshino made ground-breaking contributions to the commercialization of the lithium-ion battery, enabling the smaller and lighter secondary batteries used in smart phones and laptop computers. His technological achievements buttress today’s IT society.

Based on the research advanced by his two co-recipients of the Nobel Prize, Dr. Yoshino invented new concepts and materials for battery electrodes that provide stronger electromotive force and greater battery capacity, culminating in an efficient and safe lithium-ion battery being gifted to the world. Needless to say, the lithium-ion battery underpins today’s mobile society. Used in electric cars and in the storage of renewable energy, the battery is highly appraised as a technology that is gentle to the environment.

The winning of this Nobel Prize bears witness to the fruits born of Japan’s research prowess, including the scientific capability of its private corporations. Dr. Yoshino’s accomplishments evoke pride while giving encouragement to people engaged in research, especially to young researchers.

As a member of the Steering Committee of JSPS’s Research Center for Science Systems as well as in other capacities, Dr. Yoshino is contributing significantly to the promotion of science.

For its part, the Japan Society for the Promotion of Science will continue to support widely ranging research initiatives pursued based on researchers’ own free ideas while championing young researchers as they take on the challenges of future scientific breakthroughs. In sum, JSPS will continue playing its part in contributing to global development through the promotion of scientific research, which in the wellspring of innovation.